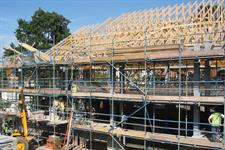 The RTPI note on local authority direct delivery of housing says perceptions of conflict of interest are a key concern where a council-owned housing company is formed.

As a result, local authorities and housing companies need to avoid governance risks, it says. This can be done by “ensuring that the housing company does not include elected members who are on the planning committee or officers who are involved in recommending on planning applications”.

The note also advises introducing “a red line separating the work of officers evaluating applications and officers advising the council in promoting the scheme”, and a “balance between useful engagement pre-application and impartial planning determination”.

“This can be difficult so it is important to have a clear and unambiguous policy here,” it says.

Full transparency is “crucial” when the council is acting as both developer and development manager, the note says. “This is especially important where planners are giving advice to the team preparing the application,” it says.

Conflict can be avoided by the use of a planning performance agreement (PPA) setting out expected timeframes and relationships, it advises.

Elsewhere, the advice note suggests that planners can support proactive delivery of homes by “laying foundations for delivery in the local plan and other planning documents”.

“One way to force development is by progressing compulsory purchase orders,” it says. “Our research found that this is much easier if sites have been identified for housing in the local plan.”

Research has also found that, in some cases, planning inspectors have given more weight to the local plan housing needs assessments of authorities that are engaging in housing delivery. “This can make the local plan examination period quicker,” the note adds.

Planners can use the plan to link housing delivery with other strategic goals, for example by delivering housing in priority growth locations or to meet particular needs such as specialist housing for older people.

Practioners further have a key role in securing buy-in from council leadership within and outside the planning department, the note goes on to say.

“One crucial way of achieving this is to highlight the benefits including the potential for income generation, demonstrating exemplar development and meeting needs not met by the market,” it states.

Meanwhile, a separate report published by the institute today says the planning system is failing to consider the rights and needs of children, leading to detrimental effects on their health, wellbeing and future prospects.

The report says that, over the past 50 years, there has been a “drastic reduction” in the use of outdoor spaces by children, as national policy has “increasingly focused on economics rather than people”.

The report calls for “a more rights-based approach” to future planning policies, which would include children in decision-making processes.