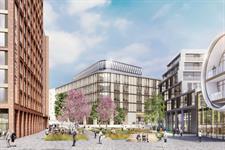 Developer St James Securities has got the go ahead for a mixed use regeneration in the Becketwell area of Derby. The developer has secured consent for demolition works and phased redevelopment with homes and commercial space. The plans, by Corstorphine + Wright Architects, include an 11 storey apartment building containing 224 apartments as well as a public square, which will be created on the current site of a United Reformed Church. The church will have new premises under the regeneration. The planning application also includes up to 25,000 square metres of offices, an innovation centre and multi-storey car park. The project is benefitting from £8.1 million of Local Growth Fund investment from the D2N2 local enterprise partnership

Manchester City Council has approved plans for two office buildings and a park, which marks the start of new development in the regeneration of Mayfield, a former rail depot and station site in the city. Regeneration will begin with almost 30,000 square metres of workspace in two buildings, The Poulton, designed by architect Bennetts Associates, and The Republic, which is designed by Morris+Company. A 581-space multi-storey car park will also be developed on the site. Alongside, a 2.6 hectare park will be created along a river crossing the park, which has been recently uncovered. A number of historic buildings, including the station, are being retained and redeveloped, with the depot building already converted to cultural venue Depot Mayfield. Mayfield is being delivered by the Mayfield Partnership, which comprises the council, Transport for Greater Manchester, LCR and regeneration developer U+I.

South Cambridgeshire District Council has approved the 406 home second phase of Cambridgeshire’s Northstowe new town, and the latest phase is set to be constructed using offsite technologies. Northstowe is being delivered by housebuilder House by Urban Splash, the company backed by regeneration specialist Urban Splash, government agency Homes England and Japanese housebuilder Sekisui House and is expected to have around 10,000 homes in all. The second phase, called Inholm, will have a range of housing typologies, later living homes and mixed use buildings. Northstowe’s masterplanner and lead architect is Proctor & Matthews Architects, and the second phase will include designs by shedkm, which buyers will be able to customise. Stephen Kinsella, chief land and development officer at Homes England, said, “This is a really ambitious proposal for 406 homes using modern methods of construction, and the quality design of these homes really reflects our ambition to deliver outstanding places”.