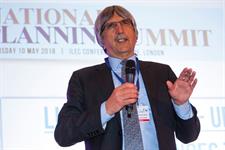 The appointment is Quartermain’s second since his departure from the Ministry for Housing, Communities & Local Government (MHCLG) at the end of March.

Last week, planning law firm Town Legal announced that the former chief planner was joining it as a part-time consultant.

Cratus Communications said Quartermain had been appointed as a senior associate in the company’s advisory team, taking on “a thought leadership, strategic and advisory role”.

The firm said it has “secured a third of the time Steve has set aside for his future work interests”.

Quartermain served as chief planner at MHCLG for more than 11 years and oversaw major policy changes including the introduction of the National Planning Policy Framework.

Before joining MHCLG, Quartermain spent 30 years in local government, starting as a graduate trainee in Epping Forest Council and going on to become head of planning at Hambleton District Council. He served as president of the Planning Officers Society, which represents local authority planners, in 2007-8.

Nick Kilby, chief executive of Cratus Communications, said: “The pressure on planning departments has never been greater and Steve will be leading our work in supporting local authorities in delivering the new homes that will remain a national priority for many years to come.”

Quartermain added: “After twelve years as chief planner I am looking forward to continuing to play a role in making places better.”